End 2016 already for the fifth time the Beer Awards Digital Festival was organised by the guys of the beer website www.beerawards.be, a now burly database on all Belgian beers that ever anywhere won a prize. And yes, this year we won a prize too! 😀

Voting was done throughout the whole month of December 2016. On your favorite beers, divided in severalÂ  categories, but also on your â€¦ â€˜Beer Event of the yearâ€™. And it is in this categorie that our Beer weekend â€“ invariably organised during the last full weekend of August â€“ won a bronze medal !

Unfortunately we couldn’t be present at the ceremony, on Tuesday 7 February 2017 at Jilles Beer & Burgers in Bruges, but in meantime we received our award through digital post. And we’re proud of it! 😉 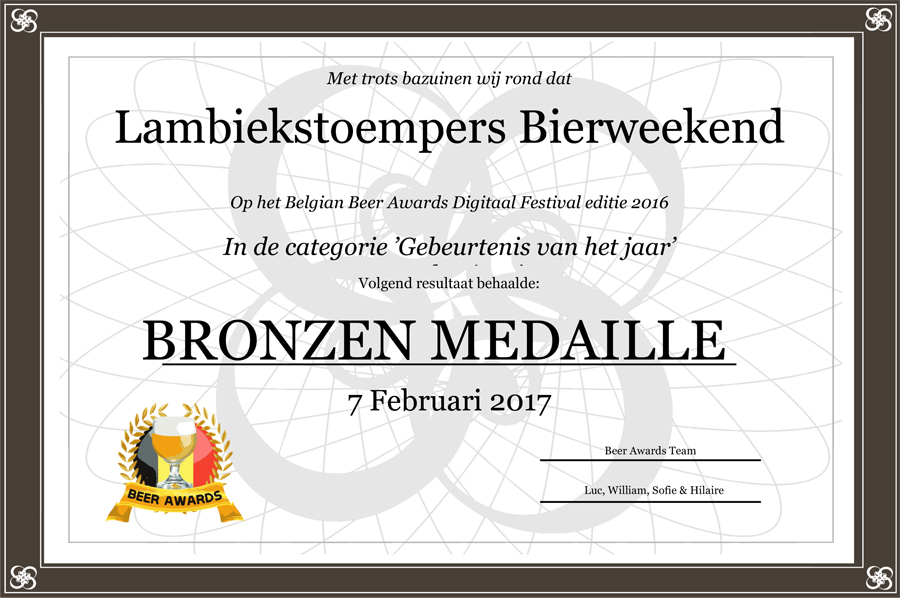 In Belgium there are only 2 other events that â€“ according to the 15.000 voters of the #BADF16 â€“ are more worthwhile and these are the “Weekend van het VolkscafÃ©” (gold) and the Brussels Beer Challenge (silver). But of course not all the voters already visited our Beer weekend, otherwise those events wouldn’t have had a chance. Isn’t it? (Just joking guys, congratulations to the other winners!)

Again this year our blogger Kristof Verhasselt won an award with his beerblog Lambikstoemper.wordpress.com. This edition he received the silver medal in the category â€˜Beer website of the Yearâ€™. Congratulations! And erh â€¦ next time you again go for gold, man! 😉

Let’s drink to that. Cheers!

> #BADF16: a report of a fantastic evening