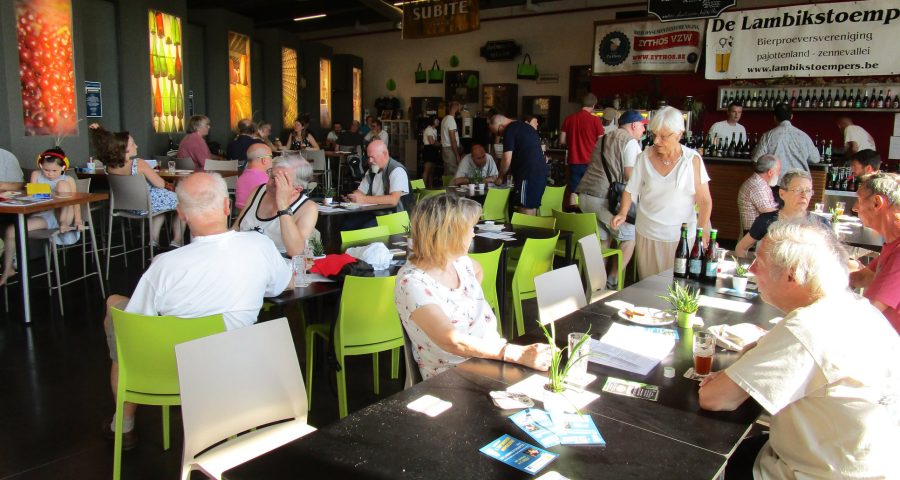 YES! It’s allowed again! On Saturday 27 and Sunday 28 august 2022 we are ready again to present you our Lambikstoempers Beer weekend. We are open respectively from 14h to midnight (on Saturday) and from 14h to 20h (on Sunday), at the beer center De Lambiek, Gemeenveldstraat 1 at 1652 Alsemberg (Beersel).

Again you will have the choice out of +100 of different beers, of which the main part are beers of spontaneous fermentation (going from non-carbonated lambic over Oude Geuze, to fruit lambic, Oude Kriek and so on). With this year a spotlight on: 100% Brussels beers!

Besides this you can enjoy tasty snacks, hopefully cosy on the sun terrace or not, while your children play on the bouncy castle or try out our colouring competition. And who knows, you might even win a nice prize in our big beer raffle!

The entrance is FREE!

ATTENTION! The Brusselsesteenweg in Alsemberg (close to ‘De Lambiek’) is closed due to road works coming from the direction of Brussels. Those who come via Halle/Huizingen/Dworp and the Winderickxplein can – despite the works – continue as usual.

2020 should have been a busy year for De Lambikstoempers vzw, but sadly the Covid-19 coronovirus decided otherwise.

After a thourough meting and keeping the current situation in mind, the board of De Lambikstoempers vzw decided to annul all planed events until the end of August.

These events are tasting of Fruit beers, the “Bezetting van ’t Parlement” (occupation of ‘t Parlement), the visits to the Micro brewery De Backer and brewery Heilig Hart, the tasting of Stout beers, the Yearly diner and … our Beer weekend!

The biggest event, the two day lasting Beer weekend that since a few years now took place at De Lambiek in Alsemberg and received visits of hundreds beer lovers from the whole world over, will no longer take place in 2020 despite of the preparations we already performed.

But for that weekend – 29 & 30 August 2020 – (and of course also all the other days) De Lambikstoempers vzw calls upon you all to go to your favourite horeca business in your neighbourhood to taste (at least) one delicious regional beer.

To everyone’s health and to support our local horeca that can use your support really bad!

Do it for yourselve, De Lambikstoempers, our Belgian beer culture, but especially for the Horeca.

Our Beer weekend 2019 is closing in fast. And our list of beers is beginning to get its final shape…

We can think of several good reasons to come to our Beer weekend on 24-25 August 2019. We sure aren’t the biggest, but – according to our visitors – by far the most pleasant beer festival.

You can taste more than 100 different beers at your ease, in tasting glasses of 15cl. Indoors, in the Bezoekerscentrum ‘De Lambiek’ at Alsemberg. But also outdoors, on their large terrace, where there is also a boncy castle for the small. Because everyone is welcome, big and small.

Of course with us the beer lovers come first. And these will sure find what they want. Did you ever see such a big “spontaneous counter” with this many different Lambic beers, Oude Geuze and Oude Kriek from all producers of the Pajottenland?

And also this year there are some “specialties”, as we call our (brand) new and/or exclusively beers we make available at our festival. What would you think of a 4 Pajot Kriek, based on his own lambic, enriched with fresh Schaarbeek’s cherries? Or what about the Oud Beersel Olijvenblad foederlambiek (olive leave cask lambic), straight from the barrel?

So again a good reason to come to our Beer weekend 2019! Members of the Lambikstoempers vzw even get a nice discount.

As we already mentionned, this year we are celebrating our 20th anniversary. And isn’t it the best way to do this with your favourite beers? Thats why our beers in focus are the 10 favorites of the Lambikstoempers’ board … Cheers! 😉

Of course on our counter we have even much more special, new and/or exclusive beers gathered for you, something for everyone, in various beer styles and colors. An experimental blond beer with blood oranges, a dark triple, a non-sweet honey beer, a session porter, a blonde with moringa (whatthehellisthat?), a gose with lemon & salt, a quadrupel with coffee, a Chardonnay saison, an unfiltered pilsner, an Oud Bruin that was boiled for 16 hours (!) … you name it, we have it!

Of course you can alse have a bite to eat, thanks to the parents council (=PTA) of the primary school Huizingen. And finally our Beer tombola – full of nice beer prizes – each year is a succes you want to miss out on.