On Friday 8 December 2017 The Lambikstoempers played an interland … beer tasting. 🙂 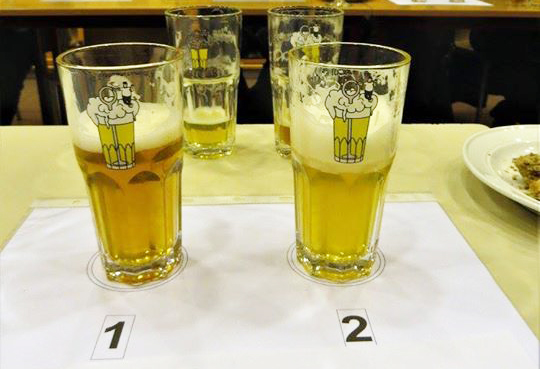 In total there were 5 different beer styles:

Per beer style the organizer Kristof Verhasselt tried to place two very similar beers next to one another: the same hops in the pale ale, malted triple, a resin nature in the IPA and a strong coffee taste in the bock and stout. This is to judge as objective as possible which of the two beers – within the same taste experience – was finally judged as the tastiest.

In total there were 18 Lambikstoempers present to taste – among which also Frank Boon and his son Karel! – and the reactions were praising. Most beers – Dutch or Belgian – hit the spot, they needed to vote nonetheless a favourite beer within each category.

And the winner was …?

So The Netherlands won in the categories ‘pale ale’, ‘triple’ and ‘bock’, while Belgium only won in the ‘IPA’-round. With the ‘stout’ the opinions were nicely divided.

And also in the general score (all votes counted together)  The Nederlands came out the winner, with in total 49 votes against 41 votes for Belgium. So, Orange on top!

Purpose of the tasting

With the score mentioned above  the goal of the tasting was reached, this was: let people taste Dutch beers unprejudiced to show that our neighbours in the North are doing well at that front.

This result wasn’t promoted, as confirmed by the attendees during and after the tasting: all beers were chosen with a objectively comparable taste within the same beer type. But  maybe the most important of it all: it was a nice, interesting and tasty tasting. 😉

> Look here at the photo’s of the tasting